Ebenezer The Sneezer tells the story of Ebenezer, who has the misfortune of constant sneezing. This story follows him during a day in his life, cleverly incorporating sight words, adjectives and colors. All told through rhymes, that will surely keep any child’s imagination. As the kids go through each sneeze, they will see things, not only on the page itself, but through their imagination. Will he keep sneezing or will he be cured? What is he going to sneeze on next. Get your copy today and find out!

Ebenezer The Sneezer is a story I created nine years ago, in 2008. It started out as a labor of love for my daughter Nylah, who at the tender age of three, showed the same zeal of reading that I had at that age. We would go to the library almost every day that summer, and she would pick out book after book after book. So I finally asked her if she would like for me to write her bedtime stories, to which she replied yes. I ended up writing a total of 20 stories, and Ebenezer The Sneezer was the first one. It is a short rhyming book, containing twelve illustrated pages and twelve pages of literature. It was written for preschool age up to about the second grade. Not only does it rhyme, but I also enlisted the use of bright illustration to capture each child’s attention and imagination. It revolves around a day in the life of the main character, Ebenezer, and the numerous things that he sneezes on. It teaches not only sight words, but adjectives and colors as well. All of these are important at this young age, but equally as important is that the children learn without realizing they are learning. But I have had a positive response from the parents and especially the children. They love Ebenezer!

Be the first to review “Ebenezer the Sneezer” Cancel reply 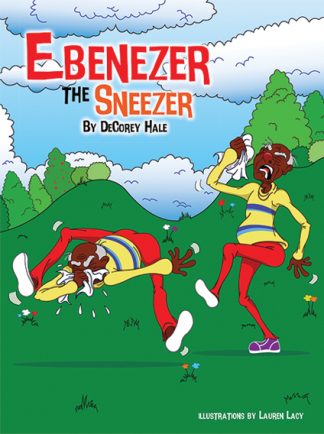 You're viewing: Ebenezer the Sneezer $9.38
Add to cart