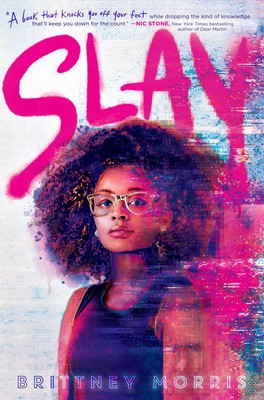 By day, 17-year-old Kiera Johnson is an exemplary honors student at Jefferson Academy, but after school when she puts on her VR headset, she becomes the anonymous black queen who developed a game called Slay.  The game was created as a safe haven for gamers of the African Diaspora who felt discriminated against in other traditional game settings. The game spread worldwide and Kiera was proud of her accomplishments, but kept her identity secret because she felt her boyfriend and family would disapprove that she was spending her time playing instead of focusing on studies.  Her life came crashing down when the dead body of a teenage boy was discovered and it was announced that he was killed over a dispute in the game. Society and the media began to ruthlessly slander the game and consequently, the mysterious creator, Kiera, who didn’t know what to do about the tragedy. One day, an angry white supremecist manages to get access to the game and contact Kiera, threatening to sue for “anti-white discrimination”.  Driven to protect herself and her game, she explores her identity as a black girl dealing with racism and microaggressions from the people around her.

When I began to read Slay, it felt like a mixture of The Hunger Games and The Hate U Give (both books I strongly recommend).  I loved the concept and story because it’s uncommon to find black girls as main characters in Young Adult literature that are strong individuals and painted in a positive light.  Malcolm, Kiera’s emotionally abusive boyfriend, adds an important element to the story as someone teenagers should look out for in their daily lives. Kiera also had a white best friend named Harper who means well, but can sometimes come off as dismissive and often misunderstands why Kiera is upset about issues revolving around race.  She also has a great relationship with her mother, father, and sister, but struggles to share her intimate feelings with them for the fear of being judged. I would recommend this book for anyone ages 13 and above who loves contemporary fiction. There is slight use of profanity and some mature scenes (in context with her boyfriend), but it’s nothing too graphic.  The writing is remarkable, the characters are dynamic, and the story is compelling to read, so this book is for anyone who would like to read about a powerful black girl!

I’m an avid reader, a member of the New Jersey Orators, and a Junior Broadcaster with KiDz HuB Media Network. I’m also an honors student, dancer, and basketball player! I love singing, acting, and anything to do with dramatic arts. Most of all, reading is my passion and I love opportunities to share my opinions of stories through book reviews. Thank you for reading my thoughts about this book!